Equity Warriors is drawn from George Perry’s work as executive director of Perry and Associates Inc. (P&A). George continues to advise schools and districts on school improvement and equity issues. You can contact George at gperry@perryandassociatesinc.com.

For 25 years, as leader of Perry and Associates Inc. (P&A), George partnered with city, board, district, school, and teacher leaders to improve educational outcomes for all students. Perry’s mission was and is to assist school districts and their schools to improve student academic achievement through structural reform, organizational alignment and the introduction of research-based practices that improve teaching and learning. At the heart of George’s work is a deep commitment to educational equity. His goal is to help leaders at every level — from the board room to the classroom — build quality teaching and learning to prepare all students, regardless of race, ethnicity, primary language, disability, gender identity, or socioeconomic status, for postsecondary education and career success following high school graduation.

From 2010-19, P&A joined with the Panasonic Foundation and San Diego (Calif.) Unified School District to (1) develop a strategic process with a robust set of indicators of quality schools and protocols that help schools and the central office align their efforts to improve student achievement; (2) facilitate board, superintendent, senior management team, and area superintendent alignment and support to schools; and (3) provide leadership coaching to schools in using models of distributive leadership, data analysis and professional learning communities. The emphasis is on implementation of the Common Core State Standards and support for English language learners. San Diego Unified was one of four finalists for the 2013 Broad Prize as the Outstanding Urban District. Our partnership is featured in the January 2017 issue of Strategies for School System Leaders on District-level Change

Beginning in August 2011, P&A began gathering and analyzing evidence and data to inform and influence the NYC Department of Education (DOE) in its citywide policy development and school-based implementation of special education reform. This collaborative effort between the Chancellor of Education, the Office of the Public Advocate and us was sponsored by philanthropies. Over three years, our independent, objective inquiry into DOE’s efforts at implementation included nearly 1,000 hours of interviews with key district and school stakeholders, union members and advocates as well as experts in special education reform. It also included monthly coordination meetings with the deputy chancellor and DOE staff, focus groups, mini case studies of 25 schools, examination of best practices in another 25 schools and analysis of internal documents and communications. Our staff provided suggestions and findings to the deputy chancellor and her senior staff during periodic informal meetings, and these contributed to mid-course corrections in DOE policy and directives. To inform the policy community, advocates and the general public, we published comprehensive reports of our findings and recommendations in August 2012 and November 2013, and our summary findings and recommendations to inform the new administration taking office in January 2014.

Read the district’s report about this work: NYC_Special-Ed-Report_August-2012.

In 2012-13, P&A facilitated the reorientation and redesign of the central offices of Montgomery County (Md.) Public Schools and Stamford (Conn.) Public Schools. In both districts, we supported superintendents in changing the purpose of central offices to “know schools well so they can serve them well.”  Support was provided in (1) breaking down silos across central office units and between units and schools, (2) rethinking data collection and calibrating knowledge of curriculum and instruction by introducing a process of instructional rounds and data analysis protocols, (3) rewriting position descriptions and accountability measures to better align central office unit responsibilities with service to schools and (4) designing and executing an “on-boarding” process including communication and work structures.

P&A’s three-year effort in Long Beach Unified School District contributed to the development of a system of principal-led initiatives. The initiatives resulted in continuous improvement in teaching and learning, increases in performance of students on state assessments, and success in implementing small learning communities. Long Beach, the third largest district in California with 25,000 high school students, was awarded the Broad Prize as the outstanding urban district of 2003 in recognition of its steady growth in student achievement and closing the achievement gap.

Since 2001, P&A has supported more than 100 urban schools in California, Michigan and Texas including those that have been designated Program Improvement Schools or schools needing state monitoring. Almost all have made and sustained progress in improving student achievement. In recognition, the California Department of Education selected us to be a State Assistance and Intervention Team and District Assistance and Intervention Team provider, working with underperforming schools across the state.

PROMOTING SYSTEMIC REFORM TO BREAK THE LINKS BETWEEN RACE, POVERTY AND STUDENT OUTCOMES

Under the umbrella of the Edna McConnell Clark Foundation’s Program for Student Achievement, P&A supported four urban school systems in their efforts to accelerate learning for middle-grades students. The four systems were Jefferson County, Ky., Corpus Christi, Texas, and Long Beach and San Diego, Calif. Having experienced improvement at the middle level, district leaders in Long Beach asked us to assist its high school office and the leaders of five Long Beach high schools in accelerating reform.

Under the auspices of the Learning Forward (formerly National Staff Development Council), P&A facilitated the 12 Under 12 Network, a group of schools committed to using high-quality professional development, in combination with other reforms, to ensure that all students would be academically proficient before 2014. The Network’s efforts to close achievement gaps were highlighted in the fall 2006 issue of the Journal of Staff Development. Learning Forward used the Network’s experience to develop and organize its Learning School Alliance that continues to operate successfully.

Read the JSD article about this work: Richardson.12Under12

USING PROTOTYPE CURRICULA AS A LEVER FOR CHANGE

Early attempts to improve instructional leadership in Flint Community Schools were unsuccessful due to great disparities in teacher knowledge and access to curriculum across grades and among schools. To align teaching and learning to rigorous state standards and grade-level expectations, the district asked P&A to develop five-week units of study for teaching English/language arts and mathematics to be used by all K-12 teachers in the district. The units included daily lessons and weekly assessments to inform instruction. Once the units were developed, we provided training and support to teachers and mathematics/literacy staff developers in implementing the curriculum and guided them in writing additional units of study. Two independent reports by the Busara Group describe our success in implementing the new curriculum and document the rapid and significant gains in student performance on the MEAP in the participating schools. 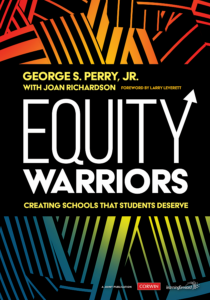 Advance equity by learning to crack the system’s codes

We must act now, using what we already know, to advance equity and raise the achievement of every student. With three decades of leading equity work across the country, George S. Perry Jr. issues a call to action for educational leaders who are willing to fight the fight for equity for all students.

Equity Warriors is a must read for leaders at all levels of the system who have chosen to be in this fight and are ready to do what it takes to make the system work for all students.